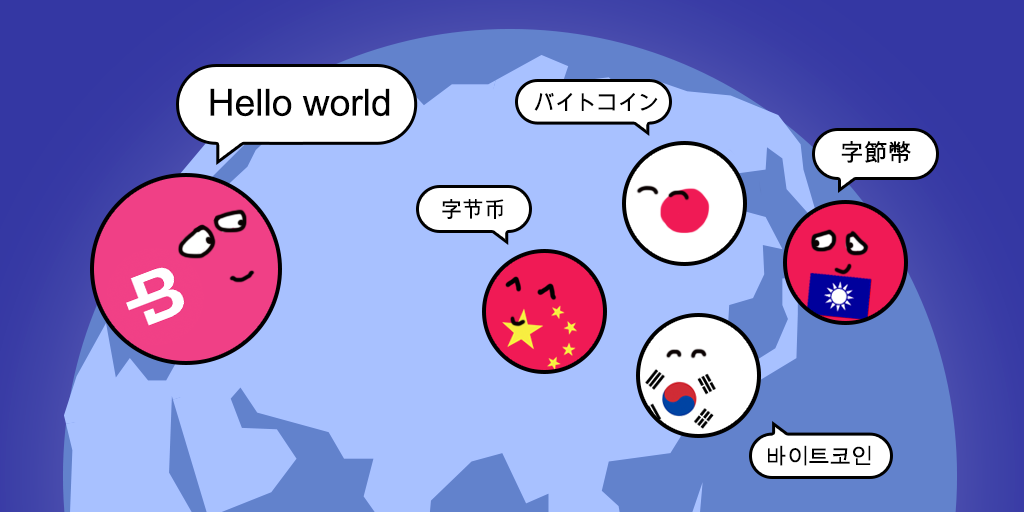 The 1st quarter has passed and we are very happy to announce that despite many obstacles, such as governmental regulations, bans, scandals, and restrictions from authorities in the Asian market, we were still successful in launching our communities in Asia. Currently we have very active community members in Korea, China, Japan, and Taiwan.

What have we experienced during our market development in the first quarter?

One of the biggest problems we have met in China is a huge misunderstanding about what Bytecoin is. Since Chinese residents prefer to name coins with Chinese characters such as 比特币 for BTC, or 以太坊 for ETH, we found out that some people call Bytecoin 百特币 (pronounced as “Byte-bi” where the “bi” means “coin”), and some people prefer to call it 字节币 (pronounced as “ZiJie-bi” which literally means “byte”+”coin”). This small issue lead to another larger one - nicely pronounced name “Byte-bi” in Chinese was already used by another Chinese made cryptocurrency with the name Bytecoin with the BYC ticker and was developed with the SHA-256 algorithm. This coin is known worldwide as “Bytecent”.

So people in China started to confuse the information about the two coins and post article descriptions with sometimes very controversial content. For example, users describing Bytecoin as a SHA-256 based coin and at the same time as the first CryptoNote coin.

Another problem for the expansion into the Chinese market is the exchanges. After the crypto ban in China, it is only possible to buy crypto with fiat through C2C services to proceed with the next trading. So for wider expansion in China, Bytecoin should first be listed at such localized exchanges with C2C services.

Now, our aim in the Chinese market is to whittle away at all the misunderstandings about BCN and build up a strong knowledge base for Bytecoin and it’s advantages!

Taiwan seemed to be a market with great potential, cryptocurrency is largely being adopted there, people are using BTC payments on a regular basis. Taiwan needs some time to become one of the centers of cryptocurrency in Asia, and before the time for it comes, Bytecoin plans to build a very strong community in this country.

The Japanese market is very open for cryptocurrencies and other blockchain progress. At the same time, government regulations in this country are getting more and more strict, so the requirements and standards for cryptocurrency reliability and transparency are getting much higher. Coincheck recently dropped all of the anonymous coins on their service which reflects this problem very well. Transparency is not about Bytecoin at all, however our code is open to everybody and we believe that with some time Japan will recognize that.

Our 1st quarter in our Asian Market development began right in the chaos and confusion of the Korean crypto market. The government and businesses were involved in scandals, so most of the Korean exchanges and other crypto projects paused their development processes and listing procedures. However, our team built a very strong and very well organized community of BCN users in Korea. There are many professional miners, traders, bloggers, and other specialists who are helping to develop a good image for BCN. Now, after a long time of state audits and inspections of the exchanges, the development procedures seem to be ‘waking up’ and we are expecting some good progress in the Korean market.

The ICO listing boom became became a small speed bump for Bytecoin. Most of the exchanges are concentrated on listing ERC20 tokens now - it’s easier and is able to provide very profitable earnings for the company, so hundreds of new ICOs have put BCN in a long line.

To summarise everything that was said above - The Asian Market remains one of the top priorities for Bytecoin, we are just at the beginning stage and there is still a lot to do to become the most wide spread cryptocurrency in this market. We will continue to move forward into Southeast Asia to develop more local communities in the markets of Thailand, Malaysia, Indonesia, Philippines, and other countries in this region.

Our team would like to express our special gratitude to Victoria, Joey, Mark, Shingo, Yu-Ming, Lindox, and also our other supporters from Korea!

Thank you everybody for your constant support!