The ASIC Statement: Clarification From The Bytecoin Team 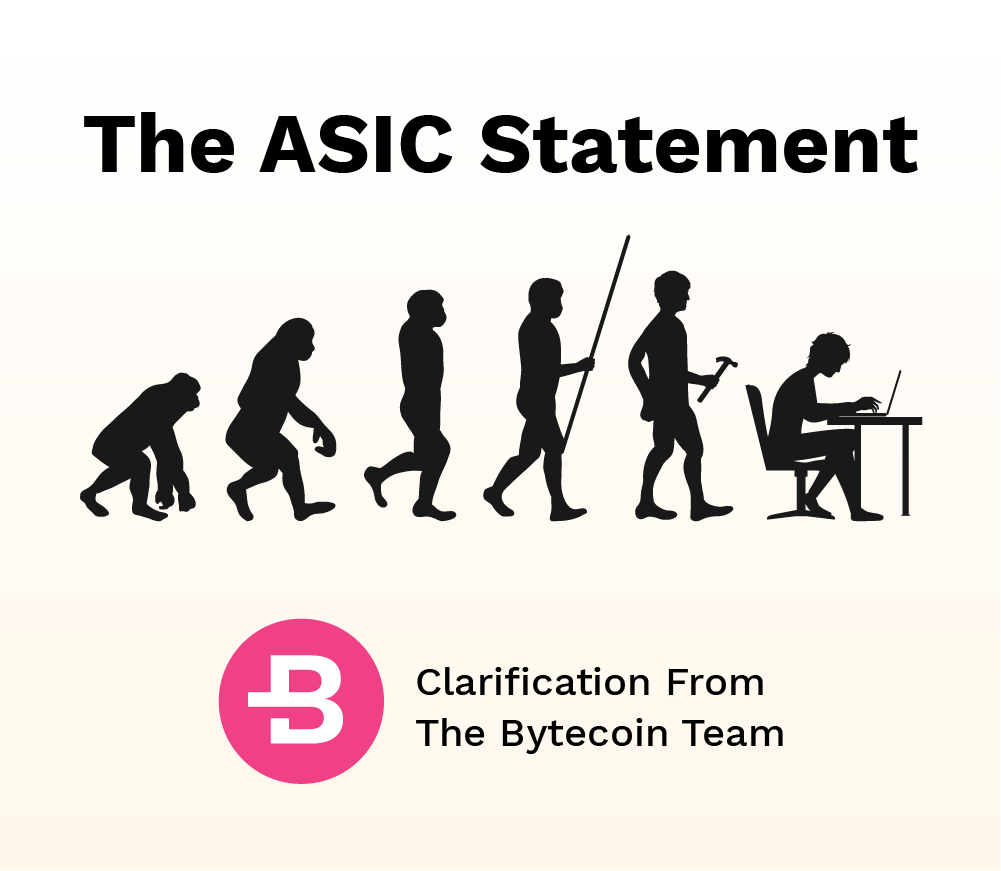 During the past few weeks we’ve seen many of the active discussions about mining and the increased hashrate. However, this discussion moves far away from a mining problem and becomes more of a political decision. We’ve decided to build a text in the following logic to shed some light on this important situation.

The role of the miners.

A miner is typically a person who is combining business with pleasure. They support the ecosystem by maintaining the network’s health and generating new blocks on the blockchain. For these actions they get block rewards of algorithmically predetermined amounts. The miners are the main contributors in the network’s health as they are the most rational users on the chain. They weigh their costs and profit to find out which currency is the most profitable to mine at the current moment and with a particular setup.

Everything goes according to plan until the day when your project achieves some weight in the crypto world. Bytecoin has rushed through all of the barriers in the history of crypto and has finally gained one of the most powerful communities and the support from many major opinion leaders. It’s a known fact that Bytecoin has many competitors and every project is fighting against each other to prove its own legitimacy. This fight has no ethical nature and even your forks from yesterday may attack you tomorrow. The only thing that can save a system’s health is a strong network hashrate. In the case that you have heard of double spend, you have to understand that it’s only a matter of time for a weak network to be attacked by double spending. As a result, many stakeholders may be robbed, as well as most of the merchants and exchanges who won’t move to the new system.

Despite the fact that the Bytecoin team is one of the biggest mysteries in the blockchain world, we do take care of our stakeholders. And our main goal is to protect the whole ecosystem from different kinds of attacks. Here they are:

Double spend attacks. It is our goal that these attacks never have the potential to happen and with the hasrate our network has now it is next to impossible to happen at all.

51% attacks. This issue is about centralization of the mining powers, however, we’re on the right path of being protected from this by supporting our local community-made pools. Thanks to the distribution of the hashrate across many different pools, Bytecoin is thoroughly protected from 51% attacks.

De-anonymization. The last few weeks we’ve been blamed because of the fact that we have not followed Monero’s hardfork, however, we haven’t done this for one essential reason - the threat of de-anonymization of our users. You may have heard that right after Monero’s hardfork, at least 4 other forks have appeared. Every single Monero user who has used the new coins (XMO, XMC, XMZ, etc.) have automatically de-anonymized themselves because of the same key images. Even with what has happened with Monero, Bytecoin still remains the anonymous cryptocurrency and we won’t let our users be de-anonymized. We’re proud to say that in the current market of anonymous currencies Bytecoin has reinforced its position because some of Monero's users have now been compromised.

Based on the above facts, Bytecoin will support ASIC mining, at least until the end of 2018. We don’t have any right to open up our system and our users to attacks, as well as let our users be de-anonymized. The basic value of a coin is based on the PoW and its consensus’ ability to protect the ecosystem. In this case, ASIC miners are acting like protective agents in their ability to defend it. The Bytecoin team would also like to acknowledge to our users that we’re coming to terms with different ways of how to continue supporting our small GPU miners. For those miners who are considering this process as one of the ways of earning, we would recommend to take a brief look at ASICs for three obvious reasons: they are at least twice cheaper than a regular GPU, they consume much less energy, and they give their users a lot more profit. In addition to this, the ASIC appearance in the Bytecoin network seems to be one more proof of system maturity.

In conclusion, we would like to remind our users of one fact: Bytecoin is a project that was launched 6 years ago and will continue to be around long into the future. During this long period of time our team has seen how the crypto world has evolved. We’ve taken a major part in building this new era of the global crypto economy and have seen a lot of promising and doomed projects. We’ve faced an enormous amount of attacks and we’re still here thanks to a very simple reason: we think before we act, and keep in mind the consequences that may follow our decisions. We’re entering the very beginning of the age of financial privacy and we understand that in the future everything is going to be a great and continued success.

Your friends in time,